A Singer Company sewing machine manufactured and purchased in 1930.

How The Machine Ended Up In My Home

My great-grandmother, Alice O’Driscoll Barbour, was born in 1895. She was the child of immigrant parents of British descent (Ancestry.com) and was a stay-at-home mother throughout her life as almost all women were during this time period. In September of 1931, at the age of thirty-five, my great grandmother had her last child, Mary-Alice Demo, my grandmother. This was the same year that my 1930 model Singer Sewing machine was purchased by Alice in Ogdensburg, New York, at a Singer Company store. It stayed here for nearly 50 years until it was moved to my Grandmother's house in 1987. It then sat for 20 years in the attic of the house until my mother took it to our home in 2007.

In an interview I conducted on March 20th, 2019 I asked my mother how she found the sewing machine, she responded “I was searching for nostalgia and happy memories when I came across what I thought was a table that my grandfather built himself. I immediately was brought back to my childhood home and I could hear the vibration and clicking of the sewing machine.” (P. Derouchie)

Through research this sewing machine has become an evocative object for my family, meaning that it has a complex emotional meaning through its history. Rather than just looking at it as a sewing machine, it is now seen as a part of my family's history.

“I was searching for nostalgia and happy memories when I came across what I thought was a table that my grandfather built himself. I immediately was brought back to my childhood home and I could hear the vibration and clicking of the sewing machine” 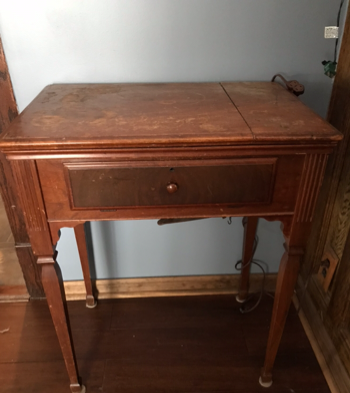 Caption
Front picture of the table that holds the sewing machine. Photo taken by me, January 4th, 2019.

The Singer Company is an American sewing machine company founded in 1889. The company's major success came from their innovative marketing techniques including advertisement targeting and credit plans (Windham Textile 1). With this came rapid expansion of the company. By the early 1900's the sewing machine was a regular household object, further increasing the demand (HistoryMuseum, 1). 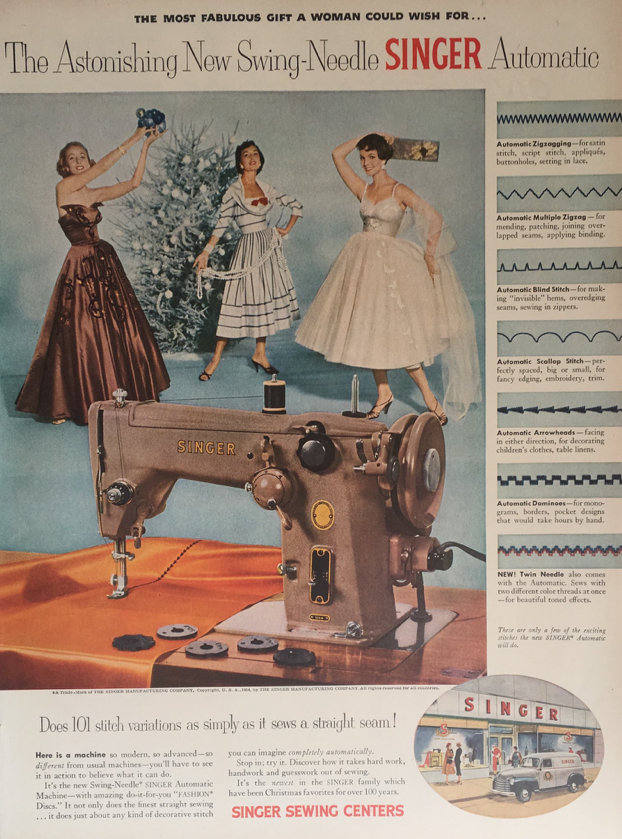 Caption
Advertisement that would be seen in catalogs in the early-mid 1900's. This advertisement was found on sale through a retro poster website.
https://retrosights.com/products/vintage-singer-sewing-machine-advertisement

The Singer Company's Connection to the North Country

During the early 1900's the Singer Company expanded internationally and was gaining popularity rapidly. During this time the CEO of the Singer Company was Frederick Bourne. Due to this rapid growth in the company, the revenue increased tremendously and Bourne purchased an island on the Thousand Islands in St. Lawrence County. With this island Frederick Bourne built a magnificent castle that still is a major landmark for the North Country. That castle is now known as Singer Castle, and is about an hour from Massena, New York. During the time that this Castle was being built, my great grandmother was just getting her sewing machine. 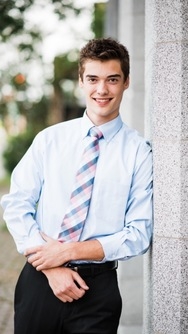 Caption
Senior Photo of Me taken by Erika Anne, August 2017.

My name is Matthew Derouchie and I am a First-year student at St. Lawrence University. I am an undeclared major for now but have interests in majoring in Economics and math. I grew up in Massena, New York, only about 30 minutes from school with my family, including my sister who goes to our rival school, Clarkson University. In this research project I looked at what seemed like a random object in my house and through research I discovered vast history on my family and this evocative artifact.